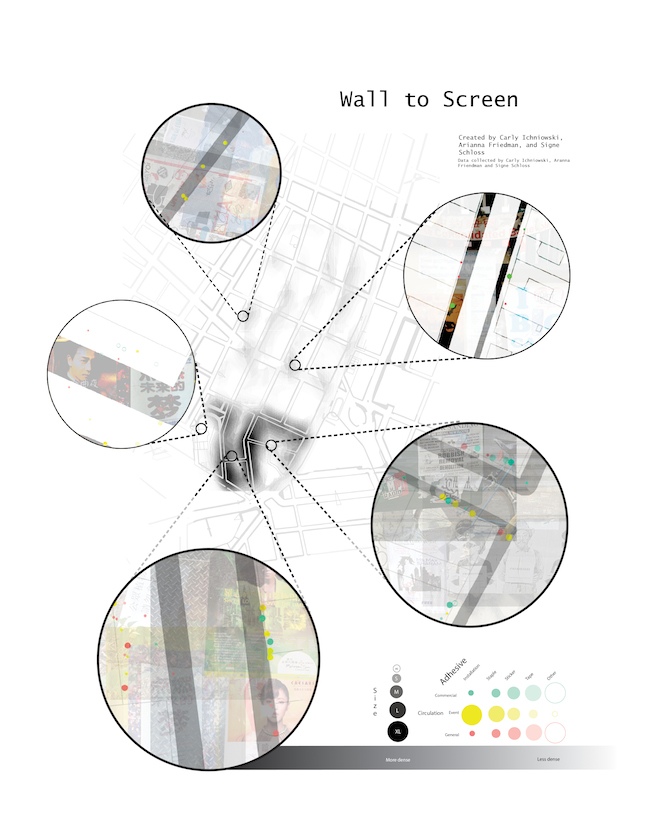 For many, the map is the primary vehicle for intuiting an unfamiliar space even though the transition between interacting with a poster on a wall and interfacing with a point on a screen creates a spatial awareness that is disaggregated from the physical site. The digital rendering of reality condenses the space between the user and the screen, forfeiting 360˚ senses (hearing, smell) and the agency of our surroundings, specifically their ability to act on us. These absences restructure how the user encounters and orients data in the coded environment.

Our maps approached the visualization of data in similar manners: the closer the user's view came to the street level, the more refined details about the dataset both the static and interactive map revealed. However, the interactive features allowed us to reorient the user's conception of the location by positioning the initial zoom layers in tandem with conscious panning and zooming restrictions. Moreover, tool-tip section drawings increased the texture of the space, not to mention added to the exploratory user experience. The static map also presents a collage of photos, but the immediate reveal lacks the element of surprise.

The entirety of the dataset cannot be viewed in one zoom level, thus the interactive map requires the user to traverse a multidimensional, yet constrained site in order to draw connections. Complementing this intricacy, the 2D static map presents the antithesis–all of the information in a single layer, although the map itself is composed of multiple attributes.